Well, it seems like the weather in Milwaukee has been a tad chilly lately.

I’ve always been mildly interested in the occasional news item about “cryonics,” preserving people in a deep freeze.  But I wasn’t planning on participating, just yet, which I nearly did, digging my car out of the polar vortex.

But warmer weather is on the way, and I’ve been looking forward to one of the great pleasures of walking in the winter – – admiring the countless shapes and shades of ice.

Some days, it’s as if an artistic glass-maker had set up an outdoor gallery.

As the weather changes, the artworks change, too.

Imagine some museum curator, carefully mounting a show, only to find that the artworks, like leprechaun gold, had dissolved away in the morning light.

Or that the artists had crept back into the galleries, to recast and refashion their artworks, with some torchwork or extra crystals, adding brushstrokes, melting their statues, or erasing figures from their paintings.

We’ve all seen artworks that change over time, of course, or disappear.

For people in more temperate climates, their first experiences of transitory art probably involved sand, not ice.  Sand castles at the beach – a great way to learn how impermanent our creations are.  “And the rain descended, and the floods came, and the winds blew, and the tide came in, and the Frisbee players trod upon it, and beat upon that house; and it fell…”

You can sometimes stop by the college library in Geneva, NY, and watch a Tibetan Lama and his class creating a sand mandala.  We’ve probably all done simple sand paintings and mosaics in school, but the mandala is huge and much more elaborate, and takes weeks to complete.  When the class was gone, you can examine it closely – and concentrate on not sneezing.

And when this colorful and complex creation is complete…it is liquidated.  The monk sweeps it into jars, and pours the sand into the lake.

The ice and snow sculptures around northern cities, of course, aren’t permanent.  Milwaukee has signs posted, warning that in preparation for the 4th of July festivities, any un-melted snowmen will be cleared from public areas. Cavemen and woolly mammoths, relics from an ice age that must have seemed eternal to our Cro-Magnon ancestors, are emerging from the melting glaciers, and ancient microbes wake up and resume their decomposition chores, as if they’d just taken a winter’s nap.

Even metal statues aren’t really frozen in time.  Bronzed faces in the park turn green with verdigris, and white with pigeon droppings – that’s the pensioners on their bench, but it happens to statues, too.  Feet of clay are revealed, shiny reputations corrode, and the statues are disappeared.

But the idea of an art gallery that evolves over time, could be kind of fun.

The Mona Lisa is intrigued by a frozen-faced, enigmatic pair, and visits the frost-bitten folks in “American Gothic.”

This year, I want to learn a bit about editing and altering pictures in Photoshop and Lightroom.  I’ve only invested a few hours so far, and in my easily-distracted way,  have just played with the cheap-tricks-and-shiny-objects, like the funhouse reflections from a frozen window.  Did you notice?  the folks in Grant Wood’s painting are edited to be a bit less grim, less icy-looking, and Lisa is a bit sadder and thinner.  The ease with which you can edit and manipulate images sends a chill down your spine.

Sometimes the ice, and digital editing, create fantastic shapes, or transmogrifies ordinary objects into something magical…and sometimes, it’s just ice, and meretricious trickery.  Lumps of gray, and grotesque distortions from freezing & thawing – – like the distorted clods of propaganda bombarding us online, or the swollen factoids and skewed images on the news, showing no visible seams, but plenty of bias.

Some days I just want to go out with a camera, and see what shots I can get, straight out of the box, freeze-frame.  And some days, digital editing is fascinating, and fun, and might even be a useful job skill sometime.

But often, the constant refashioning, remodeling, fiddling of images gets on the nerves.  So many photos look too jazzed, and our ideal of human beauty becomes freeze-dried, as every portrait is botoxed & photoshopped into an icy, blank flawlessness.  So…I blow hot and cold on this, and I guess I’ll do both, just work on taking decent photos, maybe tackle RAW format, and think of Photoshop, etc. as a separate hobby.  Some of the shots on today’s post were taken with an agèd iPhone, and it’s interesting to see what you can get with a tiny lens.

It’s not a winter scene, but I’m thinking about an exhibition I saw recently — seven versions of the same scene, by the same artist.  Monet stood on a balcony at the Savoy Hotel, peering through the smog day after day, until he’d painted “Waterloo Bridge” over forty times.

Looking at the paintings, almost immediately, you get past their familiarity (a false sense of bland prettiness, after years of seeing them on posters & greeting cards, umbrellas & iPad cases), you realize what amazing and complex works they are. 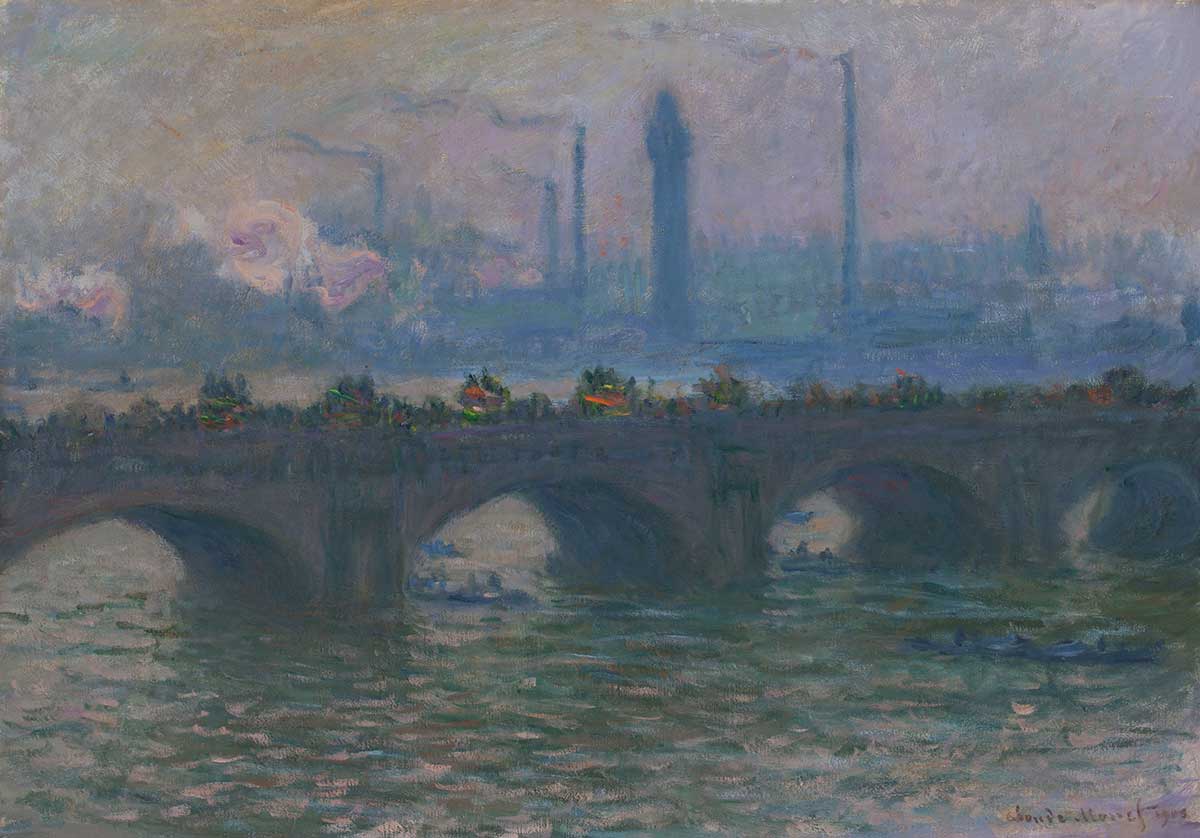 Streams, rivers, and bridges, of course, are symbols of change and transition.  And Monet was manipulating people’s visual systems, in his wonderful way, re-working and layering colors, over and over, while keeping an impression of spontaneity.  Some paintings change, as you continue to look at them.

But as far as I know, Monet never ducked into a gallery, armed with a hairdryer, to shrink his canvases, or make the paint melt into something Dalí-esque.

The Persistence of Memory. MOMA

Another painting that to me, refers to change – – iconic, unforgettable, and one of my favorites – – Dalí’s “Persistence of Memory,” with its melting clocks.  It reminds me of times when I return somewhere, and am told, nothing’s changed, nothing has been altered.  But the place is so different than in my memory, that the details seem to have melted and run.

And we know, that even in the seemingly frozen world of an art museum, those UV-screened, climate-controlled sanctums, things are happening beneath the surface of the oil paintings.  Even when the temperature and humidity levels are almost constant, the fibers of the canvas expand and contract, sawing against each other.  No matter how much we try to freeze time, and preserve the paintings, there are proteins bonding, and chemical reactions continuing.

Beneath the skin, all of us keep changing.  Stillness and lack of reaction, can be an active statement, indicating a lack of interest, or giving someone the Big Freeze, or just inner tranquility.  But when people sit there expressionless, a lot of the time, we know, or sense, there’s movement under the skin.   They could be unmoving, and appear unmoveable, and all the time, they’re silently and happily humming a tune in their head.

Just like walking alongside an iced-over, snow-covered stream, in the depth of winter, and it’s a picture of stillness.  But there’s that subtle, wonderful musical sound from the stream flowing underneath, almost like underwater chimes.

Walking over a frozen pond, it will look solid and static, but by early March, you usually hear grinding noises far beneath you.    I’ve stood next to someone, who’s still as a statue, and then become aware somehow of their inner tension and friction, and even noises under the frozen face, like ice breaking up.  (They might be grinding their teeth in frustration, or, as in my case, trying to do sums in their head.)

We’re Americans, and therefore, we love Change.  Most of us love to travel, see new sights, try new foods, hear new bands, watch new movies.  But, if you love history, you also enjoy listening to music repeatedly,and re-watching movies, to discover nuances and feelings, that escaped you, the first time around.

And sometimes, you experience a warmth when revisiting places, and finding them unchanged.

There’s the pleasure of the new (novelty, stimulation, sometimes the humor in the unexpected).  We enjoy going to see new works of art, and new shows, but  for me, there’s an equally keen pleasure in returning to a place, that I’ve been many times before, and seeing things I’ve seen many times before.  I walk down a familiar street, looking forward to seeing a beautiful old oak, a fountain, or a handsome building that’s survived the years.  Re-watching Bogart or Hepburn movies.  Or spending a day wandering through an art museum, especially when it’s twenty below outside, to look at paintings you’ve seen many times, without growing one bit bored.

It’s one of the ways that you know it’s the good stuff – – you enjoy experiencing it over and over.   And, I think, there’s also the separate pleasure, and relief, of returning to see something you like, and finding it, like a friend, unchanged, not looking a day older.

It’s not exactly exciting, but there’s a pleasant satisfaction in walking by the dioramas in old museums, often relegated to some dusty, dimly-lit back corridors.  During a visit home in December, I went to a couple of museums that I’ve visited since I was a kid. I enjoyed the new exhibitions, fresh is nice, but also enjoyed seeing the old stuff, still frozen in time.

OK, we’re on thin ice, skating awfully close to a digression, so I’ll end it here, on a note of warm nostalgia!

Sometimes, of course, ice isn’t fun, and is kind of treacherous.  Glittering snow crystals descend on us in a fantastical, dreamlike shower, too delicate to be real…and overnight, all that fairy stuff coalesces into ugly gray stumbling blocks, or a lethal concrete of black ice on the roadway, a slippery slope to the body shops and chiropractors.  The ice can destroy roads, and shatter rocks – –  I’ve read that many times, about ice cracking the hardest stone.

When I was in grade school, there was a great old history book, with pictures of Hannibal and a whole  army of elephants, trying get through the Alps, to attack Italy.  Babar-ians sacking Rome, I gathered.

I had no idea what it was all about, or how the Romans had ticked off the elephants.  I guessed it was a lack of peanuts at the Circus Maximus, or maybe something to do with the hippodromes.

But the book mentioned the Carthaginian soldiers using vinegar, not ice, to split the giant boulders blocking a path through the mountains.

I didn’t understand that part, either.

I asked my father, who explained that, like so many things in the old days, vinegar was explosive back then.  The Colosseum is in ruins, because someone dropped a Caesar salad, and it went off.

I’d learned by the age of six to ignore my father.  Thinking about it, I guessed that they’d poured liquid into the cracks, and waited for it to freeze, using ice to split the rocks.  But I looked it up, and apparently, ancient people used heat up the biggest boulders with wood fires, and then pour vinegar into the cracks, to make it shatter.  I’m still not clear on why it has to be vinegar, and not, say, elephant pee, since you had all those elephants, but I’m no engineer.

I’m very sorry not to have an attribution for this painting, which I really like. Pretty sure it’s Amsterdam mid-1600’s, when the “Little Ice Age” kicked in again.

48 thoughts on “Walks Around The Finger Lakes. Watkins Glen, December.”